Is What Used to be Team America now World Policed?

If not, then stroking out in a fit of apoplectic rage is just what They* want you to do.

I’ve been a casual observer of conspiracies for decades.  The entire purpose of many of them is to provoke alarm and foolish outbursts from the truly concerned which can then be amplified and magnified by concern troll agents provocatuer  in order to provide a basis for ridicule, delegitimization,  and marginalization.

But, then again, some conspiracy theories are true.

Wither Sovereignty —  Executive Order Amended to Immunize INTERPOL In America – Is The ICC Next? broke on December 23, 2009.

Why Does Interpol Need Immunity from American Law? same date.

Could Obama Use INTERPOL to Evade Constitutional Law? December 30, 2009

If you really are prepared to support and defend the Constitution against all enemies, foreign and domestic, so help you God, are you any less prepared today than you were on December 22, 2009, before you knew about Interpol?

Don’t get excited.  It matters little what badge they wear.

Clean your weapons.  Hone your blades.  Contemplate the task before you.

*  all enemies, foreign and domestic, included amongst which are Transnational Progressivists.

The Unorganized Militia of Northwest Flight 253

There was a pop and then smoke wafted through the cabin. A passenger then climbed over several seats, lunged across the aisle and managed to subdue the suspect, the eyewitnesses said. The Nigerian man was placed in a headlock before being dragged up to the first class cabin. WSJ

Pandemonium ensued as crew members tried to douse the suspect with water.

“He took him under his arm and got hold of his neck and then other people helped him,” Jafry, who was sitting three rows behind the suspect, told Fox News. “He handled it very well.”

The heroic passenger was taken to the University of Michigan Medical Center and was still hospitalized Friday night. The extent of his injuries was not revealed. — NY Daily News

Hero 2009! Kaffir of the Moment! Infidel of the Year Award! Jasper Schuringa!

The Unorganized Militia Once Again is Needed — general militia membership is a socially constructed state of mind and is one to be encouraged and honed rather than discouraged and ridiculed.

Look what Santa Claus brung me

Who are these guys?

Are these Gordon Brown’s arbakai from two years ago?

Did they used to be Helmand Scouts?

Whoever they are, British Special Forces Support Group apparently have stood up a “highly regarded” force of indigenous auxiliaries.

British special forces are based in a secret location which The Sunday Telegraph has decided not to identify, where the SFSG select and train Afghan volunteers to serve in the highly regarded Afghan Territorial Force (ATF).

Those who pass the rigorous selection process, which involves physical training, field craft tactics and weapon skills, are posted to front line units to work closely with British troops, where they are now highly regarded.

The Sunday Telegraph has agreed to an MoD request not to publish further details of the relationship between the ATF and the special forces for fear that security may be compromised.

But one defence source said: “The ATF are in great demand. They have saved dozens of British lives. Every unit in Helmand wants to work with them because they are such a fantastic asset.”

I have been trying to keep up with tribal militias, village defense forces, AP3/APPF/Guardians, and any other anti-Taliban Pashtun Armed Supportive Groups, but this is the first I’ve heard of the ATF

Brigade Reconnaissance Force (BRF) and Afghan Territorial Force (ATF)
The BRF is an integral asset of UKLF CSG, [United Kingdom Landing Force Command Support Group] and the ATF is a collaboration between UK and Afghan personnel that seeks to maximise the impact of the newly formed indigenous security forces. Working alongside ATF provided the troops with local insight. Working with some 14 different organisations, there have been elements deployed on the ground for over 100 days during the last six months and the energy and flexibility of the reconnaissance troops was shown in the nine different major operations that BRF have been involved in over the tour.

Just prior to Christmas, and again recently, they were involved in independent initiatives in the areas of Nad-e-Ali and Marjah which have done much to facilitate the increasing security within Lashkar Gah, Helmand’s provincial capital. These areas are used as safe havens for the Taliban leadership and provide substantial levels of income to the enemy through poppy cultivation. In addition, BRF has protected logistic patrols and successful counter-narcotic operations have also seen them capture over 10 tonnes of poppy seed, 5 tonnes of hashish and 80kg of wet opium.

£500,000 cash gift to the Government of Afghanistan to allow them to equip an Afghan Territorial Force in Helmand province. (Notified to the House of Commons in a departmental minute of 30 October 2006).

Filed under IW, The Forgotten War 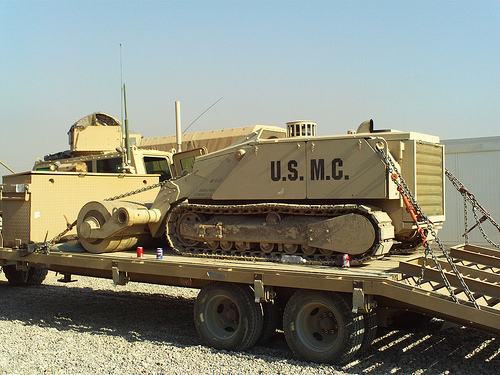 Marines Pounce Behind Taliban Lines With Ospreys and Armored Steamrollers

Filed under The Forgotten War